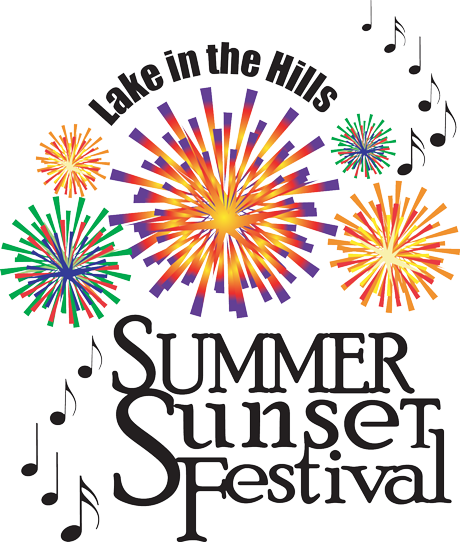 JOIN US FOR LIVE MUSIC ALL THREE DAYS OF THE SUMMER SUNSET FESTIVAL! 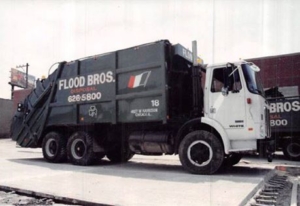 More information on bands is available below. Currently, all entertainment has been filled for the 2021 season. If you are interested in performing at the 2022 Summer Sunset Festival, please contact us.

Special thanks to our Main Stage sponsor, Flood Bros. 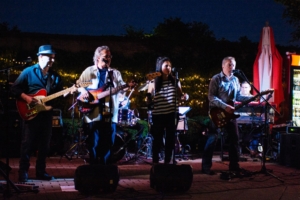 This End Up Band

This End Up Band promises an evening of FUN! Playing a great mix of famous rock and pop music with a dash of country, putting their mark on songs made famous by artists ranging from Aretha Franklin to Pink, to Kelly Clarkson, from John Mellencamp to Bruno Mars, to One Republic. They pride themselves on playing tunes that appeal to all audiences! The combination of drums, guitar, keyboards, and great vocal harmonies always gets the crowd moving.

So come hear THIS END UP…You’ll END UP having a fantastic time! 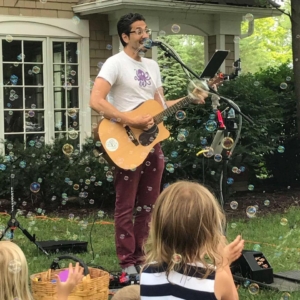 When Istvan starts rocking, kids can’t help but join in, sometimes on stage, while their moms and dads cheer them on and enjoy the original tunes.  Enjoy an irresistible mix of interactive rock ‘n’ roll, country, pop, punk, and sing-alongs that get heads bobbing. Istvan involves the crowd, whether it’s playing freeze dance mid-song, inviting them up to sing along, or having them ring out the rhythm on a tambourine.  Istvan & His Imaginary Band have become kid and family music favorites. 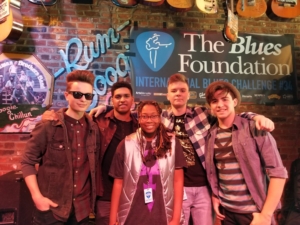 The Instinct is a high-energy, blues-influenced band that has played internationally since 2016.  The young band has played dozens of high-profile shows and festivals and has enjoyed extensive media coverage. The Instinct was presented with the 2018 Chicago Music Award for Most Talented Teens, represented the Canada South Blues Society in the Youth Division at the International Blues Challenge in Memphis, two performances at The Chicago Blues Festival, and played several festivals and shows in Illinois, Indiana, Tennessee, and Ontario. In addition, the band has shared the stage with Eddie Money, Jonny Lang, Beth Hart, and many other top acts at Bluesfest Windsor. 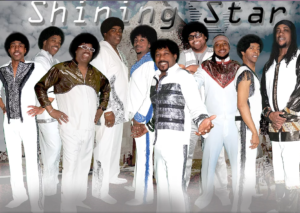 Ten highly talented vocalists and musicians harmoniously join forces to present A TRIBUTE TO EARTH, WIND AND FIRE, a celebration of the four-decade strong success, popularity, and resilience of one of the most successful musical stories ever told……EARTH, WIND & FIRE. 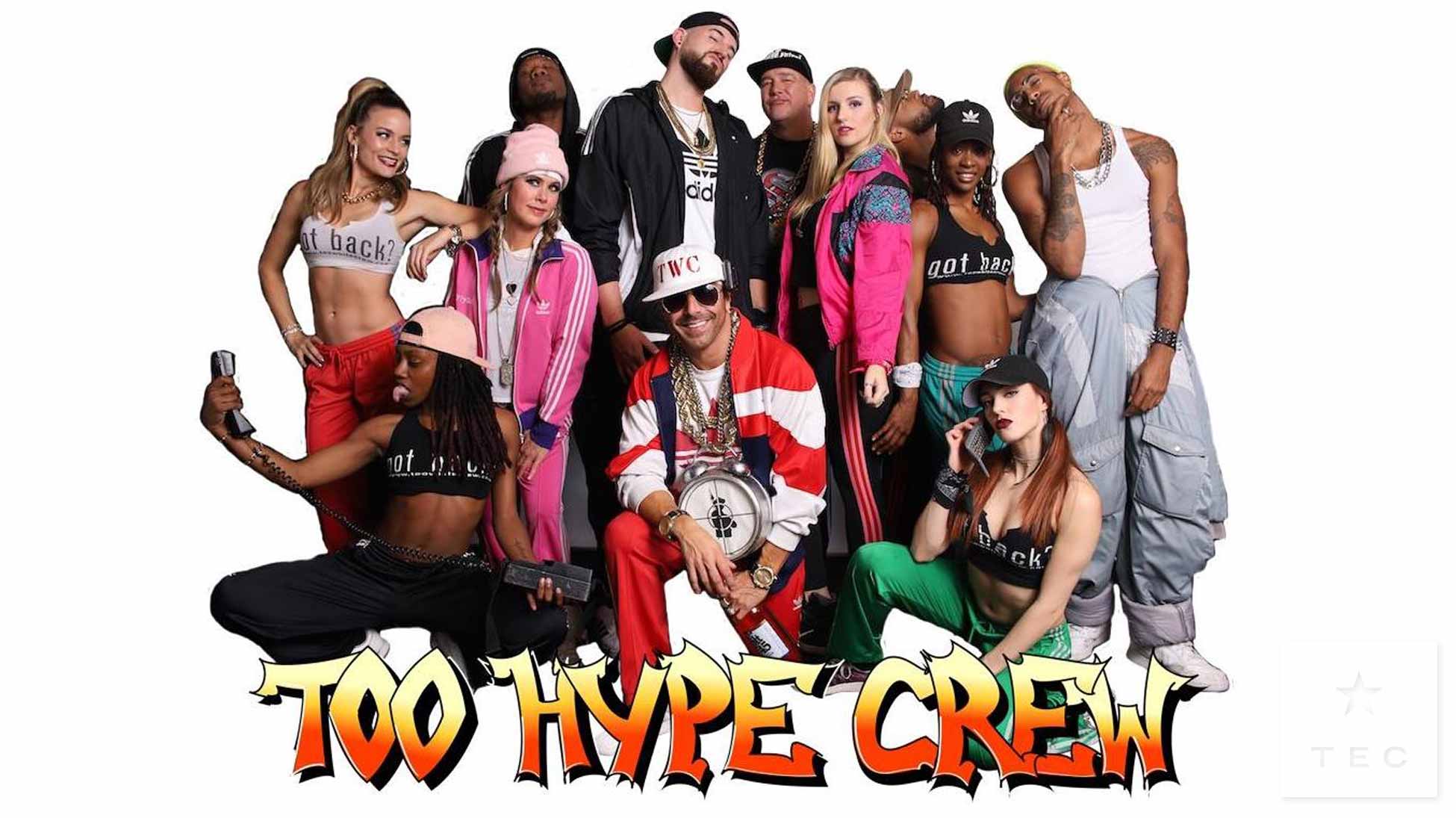 More than a party band, more than a tribute band, Too Hype Crew is a full-blown rump-shakin’, rhyme-makin’ old school hip hop experience like nothing else you’ve ever seen! A tasteful tribute to the fun hip hop and party anthems of the ’80s, ’90s, and early ’00s, featuring an all-live six-piece band, MC’s, and “Fly Girl” dancers. 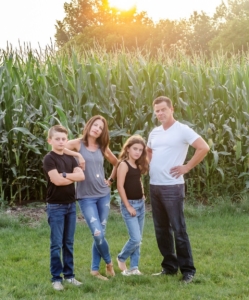 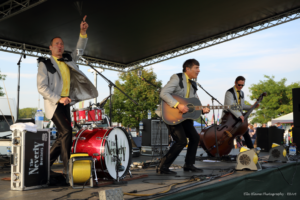 The Neverly Brothers: A Rock n’ Roll Tribute – from Elvis to The Beatles!
This national touring act‘s concerts are a tribute to one of the most exciting chapters in music history: the birth, near-death, and resurrection of rock n’ roll. The first half of their concert pays tribute to the 1950s American rock n’ roll, Rockabilly, and Rhythm & Blues pioneers. The second half pays tribute to the next wave of bands they inspired: the 1964 British Invasion groups. Their infectious energy and electrifying performances play out like a history of rock n’ roll – from 1955 to 1965 – complete with a chronological song selection, rock history narrations & period-perfect wardrobe changes. Their repertoire consists of early hits by Jerry Lee Lewis, Chuck Berry, Little Richard, Buddy Holly, The Beatles, The Rolling Stones, The Kinks, The Dave Clark Five, and many more.
It‘s not “moldy oldies”- it’s “old-school cool!” And it’s truly a one-of-a-kind MAGICAL HISTORY TOUR! 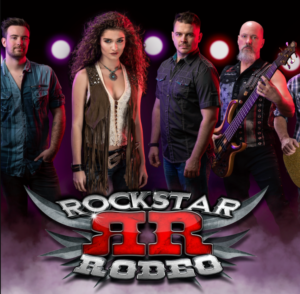 Are you a ROCK N COUNTRY MUSIC fan?
RockStar Rodeo is more than just your average country band, and a lot more than just your ordinary rock show. Take the best you’ve heard from Austin, the fun you’ve heard from Nashville, the boogie from the South, and the best of times you’ve had in the Midwest, now add the hottest modern Rock & Pop TOP 40 Country hits, and you’ll be kickin’ your night into one wild Rodeo Party.

This isn’t your daddy’s band, RockStar Rodeo has recently expanded much of its musical repertoire by delivering not only the best in the top 40 country but also many of the timeless rock classics from the 80s through today! A nonstop show with crowd interaction that is second to none. One minute you’ll feel the energy as the crowd sways their hand’s side to side while singing Wagon Wheel, and the next minute, they’re playing the air guitar to an ageless hit like Shook Me All Night Long. 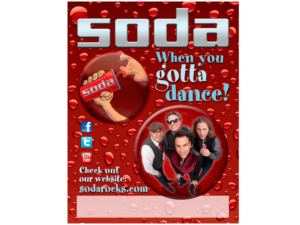 One of Chicago’s tightest and most popular bands, Soda brings the soundtrack that keeps you moving!

What’s your flavor? Because you’ll get everything all the time with Soda. From Johnny Cash to The Zac Brown Band, and from Lady Gaga to Bruno Mars, this band can do it all. Multiple lead singers, each with distinctive styles, work to bring authenticity to all your favorite songs. The possibilities are endless. Classic Rock, 80’s New Wave, Motown, Disco, Hip-Hop, Reggae, Alternative–the list goes on and on.